The co-inventor of the modern barcode sadly died recently, but his dream that touches billions of people every day lives on.

Inventor whose beach dreaming led to the barcode 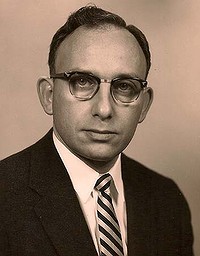 N. Joseph Woodland, who six decades ago drew a set of lines in the sand and in the process conceived the modern barcode, died on Sunday at his home in Edgewater, New Jersey. He was 91.

A retired mechanical engineer, Woodland was a graduate student when he and a classmate, Bernard Silver, created a technology — based on a printed series of wide and narrow striations — that encoded consumer-product information for optical scanning.

Their idea, developed in the late 1940s and patented 60 years ago, turned out to be ahead of its time. But it would ultimately give rise to the universal product code, or UPC, as the staggeringly prevalent rectangular barcode is officially known.

The code now adorns tens of millions of different items, scanned in retail establishments around the world at the rate of more than five billion a day.

The barcode would never have developed as it did without a chain of events noteworthy even in the annals of invention etiology.

Had Woodland not been a boy scout, had he not logged hours on the beach and had his father not been quite so afraid of organised crime, the code would very likely not have been invented in the form it was, if at all.

Norman Joseph Woodland was born in Atlantic City, New Jersey, on September 6, 1921. As a boy scout he learned Morse code, the spark that would ignite his invention.

After spending World War II on the Manhattan Project at Oak Ridge National Laboratory in Tennessee, Woodland resumed his studies at the Drexel Institute of Technology in Philadelphia (it is now Drexel University), earning a bachelor's degree in 1947.

As an undergraduate, Woodland perfected a system for delivering elevator music efficiently. His system, which recorded 15 simultaneous audio tracks on 35-millimetre film stock, was less cumbersome than existing methods, which relied on LPs and reel-to-reel tapes.

He planned to pursue the project commercially, but his father, who had come of age in Boardwalk Empire-era Atlantic City, forbade it: elevator music, he said, was controlled by the mob, and no son of his was going to come within spitting distance.

The younger Woodland returned to Drexel for a master's degree. In 1948, a local supermarket executive visited the campus, where he implored a dean to develop an efficient means of encoding product data.

The dean demurred, but Silver, a fellow graduate student who overheard their conversation, was intrigued. He conscripted Woodland.

An early idea of theirs, which involved printing product information in fluorescent ink and reading it with ultraviolet light, proved unworkable.

But Woodland, convinced that a solution was close at hand, quit graduate school to devote himself to the problem. He holed up at his grandparents' home in Miami Beach, where he spent the winter of 1948 to 1949 in a chair in the sand, thinking.

To represent information visually, he realised, he would need a code. The only code he knew was the one he had learned in the boy scouts.

What would happen, Woodland wondered one day, if Morse code, with its elegant simplicity and limitless combinatorial potential, were adapted graphically? He began trailing his fingers idly through the sand.

"What I'm going to tell you sounds like a fairy tale," Woodland told Smithsonian Magazine in 1999. "I poked my four fingers into the sand and for whatever reason — I didn't know — I pulled my hand towards me and drew four lines. I said: 'Golly! Now I have four lines, and they could be wide lines and narrow lines instead of dots and dashes.' "

That transformative sweep was merely the beginning. "Only seconds later," Woodland continued, "I took my four fingers — they were still in the sand — and I swept them around into a full circle."

Woodland favoured the circular pattern for its omnidirectionality: a checkout clerk, he reasoned, could scan a product without regard for its orientation.

On October 7, 1952, Woodland and Silver were awarded US patent 2,612,994 for their invention — a variegated bull's-eye of wide and narrow bands — on which they had bestowed the unromantic name "Classifying Apparatus and Method".

But that method, which depended on an immense scanner equipped with a 500-watt light, was expensive and unwieldy, and it languished for years.

The two men eventually sold their patent to Philco for $15,000 — all they ever made from their invention.

By the time the patent expired at the end of the 1960s, Woodland was on the staff of IBM, where he worked from 1951 until his retirement in 1987.

Over time, laser scanning technology and the advent of the microprocessor made the barcode viable. In the early 1970s, an IBM colleague, George J. Laurer, designed the familiar black-and-white rectangle, based on the Woodland-Silver model and drawing on Woodland's considerable input.

Thanks largely to the work of Alan Haberman, a supermarket executive who helped select and popularise the rectangular barcode and who died in 2011, it was adopted as the industry standard in 1973.

Woodland, who earned a master's in mechanical engineering from Syracuse University in the 1950s, received the National Medal of Technology and Innovation in 1992. Last year, he was inducted into the National Inventors Hall of Fame. (Silver, who died in 1963, was inducted posthumously along with him.)

Besides his daughter Susan, Woodland is survived by his wife, the former Jacqueline Blumberg, whom he married in 1951; another daughter, Betsy Karpenkopf; a brother, David; and a granddaughter.

Today, the barcode graces nearly every surface of contemporary life — including groceries, wayward luggage and, if you are a traditionalist, the newspaper you are holding — all because a young man, his mind ablaze with dots and dashes, one day raked his fingers through the sand.